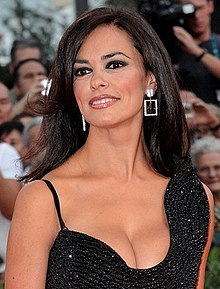 After Meeting Maria Grazia Cucinotta, She Left For Hollywood

I met Maria Grazia Cucinotta in Venice. Our meeting was a dream. After one English lesson she went on in America to work on the American TV series, The Sopranos. I am still waiting for my royalties.

Maria Grazia Cucinotta (born 27 July 1968) is an Italian actress who has featured in films and television series since 1990. She also worked as a film producer, screenwriter and model. Internationally she is best known for her roles in Il Postino and as the Bond girl, credited as the Cigar Girl, in the James Bond film The World Is Not Enough.

Cucinotta was born in Messina in Sicily, Italy. She is well known in Italy as a movie and television actress. She guest-starred in The Sopranos episode “Isabella“. She also appeared on The Simpsons episode “The Italian Bob” voicing Sideshow Bob‘s wife, Francesca.

She won the America Award of the Italy-USA Foundation in 2010.