1. They both rose to fame via property before conquering the media

Having begun his career at his father’s property business, Trump’s ambition quickly grew and he began working on skyscrapers, completing the 72-storey Trump World Tower in 2001. Today, he owns millions of square feet of Manhattan real estate as well as golf courses and resorts worldwide. Berlusconi also began his career in the world of property, building 4,000 residential apartments close to Milan.

It wasn’t long before both men moved into the media industry; Berlusconi used the profits from his construction business to set up his advertising agency. Fast forward a few years and he was at the helm of a vast media empire, encompassing three national TV channels, a network of local TV stations and print media ventures.

Trump, meanwhile, clearly felt more suited to an on-camera role than staying behind the scenes. He became host of The Apprentice – earning two Emmy nominations – and has played himself in several films and TV shows, whilst also becoming a part-owner of the Miss USA and Miss Universe beauty pageants. 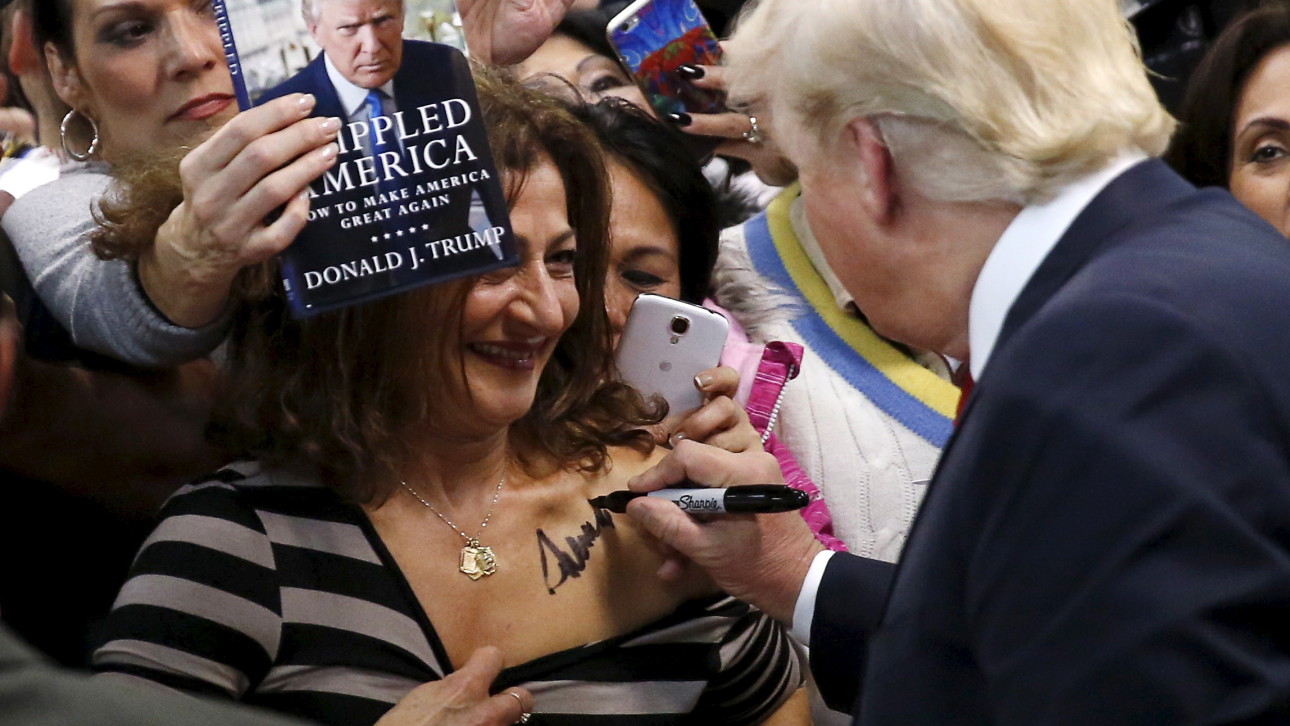 Both politicians present themselves as ladies’ men. “It doesn’t matter what the media write as long as you’ve got a young, and beautiful, piece of ass,” says Trump.

But these comments are nothing when compared to the tales of Berlusconi’s extravagant ‘bunga-bunga’ sex parties, which provided fodder for Italian tabloids for years. He narrowly avoided jail when exotic dancer Karima El-Mahroug said she had invented claims that strippers had “bodily stimulated” the politician.

3. They both have headline-grabbing hairstyles…and orange tans

Countless column inches have been devoted to Trump’s comb-over, which even has its own Twitter account with a size able following. Speculation is high as to whether the questionably-styled hair is all his own, but Trump has denounced those who doubt its authenticity as “haters and losers”.

The same can’t be said for Berlusconi. The ex-premier has had two hair transplants – in 2004 and 2005, while photographs appear to show the use of make-up to ‘fill in’ the gaps in his receding hairline.

The pair also seem to have an appreciation for the same (orange) tanning booths.

4. They made big promises in a bid to gain power

Trump’s slogan ‘Make America Great Again!’ has the same nationalist undertones as the name of Berlusconi’s Forza Italia party, the name of which translates as ‘Strength Italy’ and is taken from a popular football chant. Berlusconi utilized his TV network in a campaign of advertisements which led to his election, whilst Trump’s own personal wealth has helped him in his campaign to be the Republican candidate.

One of the key promises Berlusconi made was to create “one million more jobs” for Italians.

Trump enjoys using Twitter to retweet comments from his supporters, weigh-in on the attractiveness of female celebrities (repeatedly), deny climate change and deliver sassy put-downs to his “haters”.

Berlusconi, on the other hand, prefers the power of pictures over words, and joined Instagram last year, posting an impressive 60 photos in his first day. He’s calmed down since then, but is now nearing his 100th post and has over 35,000 followers on the site.

6. Neither have been to my home

Neither Silvio Berlusconi nor Donald Trump have ever visited my kitchen. I also never attended the fraudulent Trump University and I was never invited to Silvio’s famous wild parties in Arcore.